When it comes to nanotechnology, we can get a bit lost in the science fiction of it all and overlook some of the advancements to the sensors of our time. From the accelerometer in your phone to the biosensors assisting doctors with diagnostics sensors are some of the most directly applicable ‘rewards’ of nanotechnology. One such promising sensor being researched at the moment is the Nitrogen Vacancy center in Diamonds, which through a process called ODMR (Optically Detected Magnetic resonance)[i] is capable of detecting minute magnetic fields as well as their direction even under ambient conditions.

The Nitrogen Vacancy color center occurs when a carbon atom in the diamond lattice is replaced by a nitrogen atom which can form one less bond than carbon leaving a vacant space next to it. This has an interesting effect of making the emitted light from the diamond electron spin dependent, reversely making it possible to detect changes to its electron spin simply by measuring the light returning from it after the diamond is simultaneously exposed to laser light and microwaves of certain energies. The process has already demonstrated impressive sensitivities of 0.9 pT/Hz  [ii], which with the benefits of not needing a magnetically shielded room, non-cryogenic temperature range, and the biological compatibility of diamonds makes it more practical than existing high sensitivities such as the S.Q.U.I.D. The biggest limitation to this technology is how effectively we can produce these NV centers in the diamond crystal as well as the cost 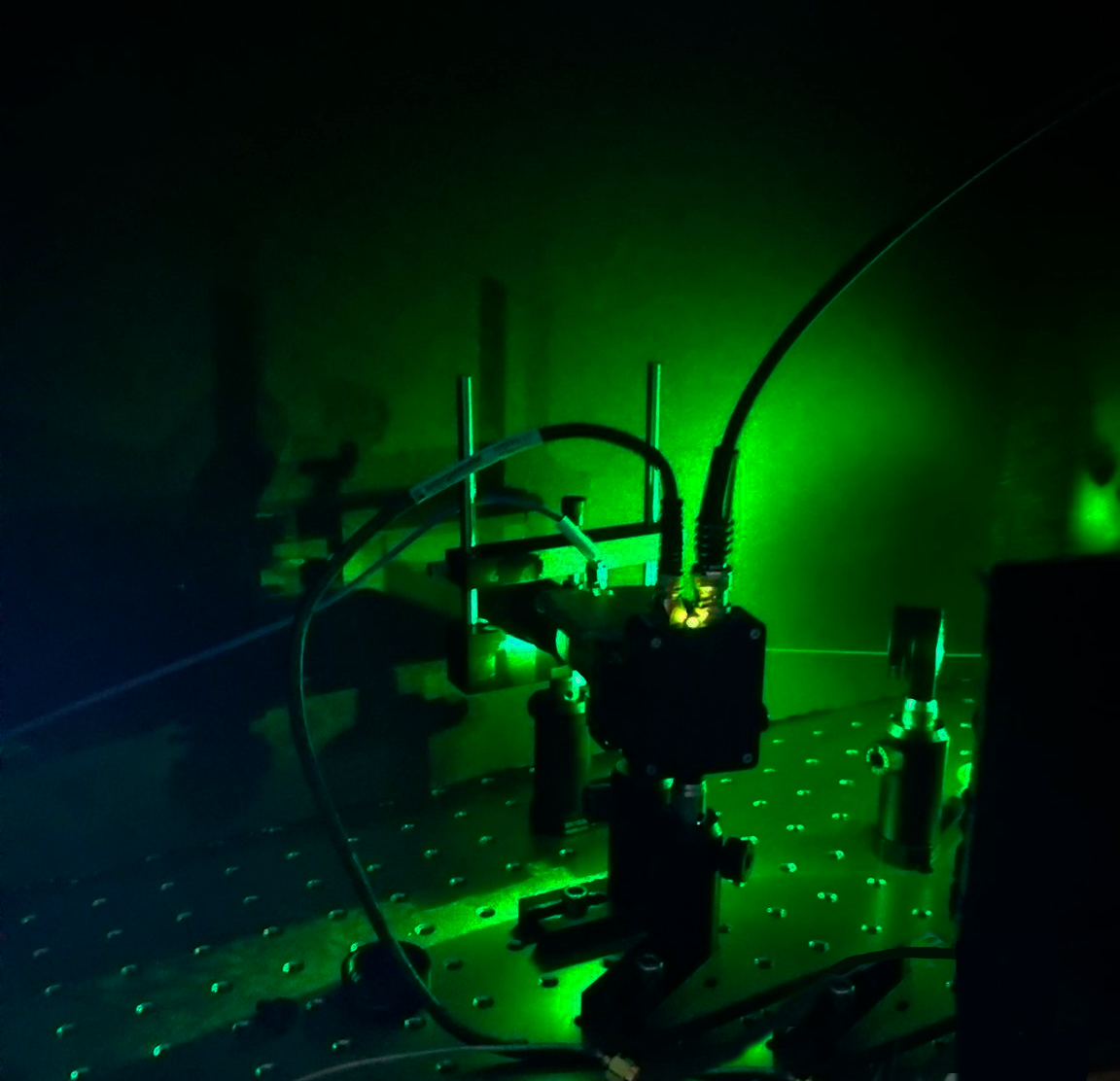 Shows a simple ODMR setup. A green laser is hitting the diamond
and the emitted light from the diamond is collected by a photodiode.

What then are the applications of such a sensor? When most think of magnetism they think of Earth’s magnetic field with a north and a south pole which has been used for centuries to navigate the globe. While we think of this as somewhat antiquated, this old practice might once again become the way we navigate. Since the NV sensor gives a 3-dimensional vector of the magnetic signal (as opposed to the 2 dimensions of a normal compass) engineers at Lockheed Martin [iii] are developing a way to analyze small anomalies in Earth’s magnetic field to determine a position. This bypasses the need for any signals to be sent by satellites such as the GPS system making it operational in any type of weather anywhere on the earth’s surface as well as completely un-jammable.

A less apparent application comes from electromagnetism and how electrons in motions, such as a current through a wire, produces a magnetic field. This applies to everywhere electrons flow and is not limited to electronics making it a possibility to see the magnetic fields created by nerve signals as well [iv]. Using this method, it should be possible to create a 3-dimensional image of the nerve signals propagating through the organism. Such technology could undoubtedly be useful for procedures such as cardiograms to diagnose heart disease as well as in furthering our understanding of the brain and related diseases such as Alzheimer’s, Dementias, or Parkinson’s. These possibilities have piqued the interest of both Biologists and Physicists alike making the NV-center one of the more thoroughly researched and promising sensors to look out for in the future.

If you’d like to learn more about nanotechnology, please subscribe to our newsletter and stay tuned for upcoming posts.

Get updates on applied nanotechnologies and expand your knowledge.